The full schedule for next January’s Aussie Millions has been announced, with players being provided with a substantial number of side tournaments alongside the AUD$10,000+AUD$600 buy-in No-Limit Hold’em main event. 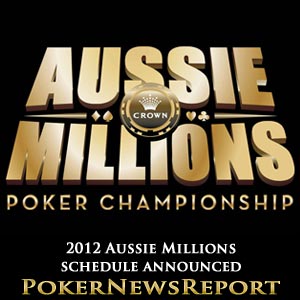 The full schedule for next January’s Aussie Millions has been announced, with players being provided with a substantial number of side tournaments alongside the AUD$10,000+AUD$600 buy-in No-Limit Hold’em main event.

The Aussie Millions first entered the poker calendar back in 2004 when a mere 133 entries were logged. But two years ago that number had increased to 681 entries, while this year’s staging of the event attracted 721 competitors.

Organisers will certainly expect that number to get close to the 1000 mark come early next year when the event begins on January 22 at the Crown Poker Room in Melbourne, although the first event on a packed schedule is a AUD$1,000+AUD$100 No-Limit Hold’em tournament on January 12.

The Aussie Millions has undoubtedly become a must-visit tournament for the majority of poker pros as it has gained a reputation that ranks it alongside the World Series of Poker (WSOP) and the World Poker Tour (WPT) World Championship.

So expect the number of big-name pros visiting Melbourne to take part in the event to reach way above double figures as the whole tournament runs from January 12 to 30.

Of course, the five-day main event will garner the majority of coverage following on from this year’s winner, home player David Gorr, collecting an incredible AUD$2million after seeing off James Keys in their heads-up battle. The Englishman still picked up AUD$1,035,000 for his runner-up spot, though.

Certainly, Australian star Joe Hachem can’t wait to get down under for the main event.

The 45-year-old spoke to wptmag.com about his hopes for the January tournament and said that he is “dying to take down the trophy one year to add it to my collection for a number of reasons”.

Hachem, who collected $7.5million when he became the first Aussie to win the main event of the WSOP back in 2005, continued by saying he believes the Aussie Millions is “so prestigious”, but also reckons “it would be cool to win something in your home town”.

He has, however, never won the title, stating that his “closest run came in 2007 when I came 23rd”, so he is hoping that he can overcome his “love-hate relationship with the Aussie Millions”.

Hachem expanded on this by adding that, while he loves the event, “it just hates me…maybe because I want to win it so badly”.

Of course, “something horrible always happens to me every year poker-wise”, although Hachem does still “get excited in December/January when I know the Aussie Millions is coming round because it means I have another shot at grabbing that elusive title again”.

But there will be another 25 side events taking place over the 19 days of tournaments, with the AUD$100,000 Challenge being an expected highlight.

The two-day tournament is sure to be a thriller after this year’s event saw a prize pool that went beyond the AU$3,800,000 mark as England’s Sam Trickett picked up a cheque for AUD$1,525,000 after securing the title.

That buy-in will definitely be too hefty for the majority of poker players, but the other 24 side events will still provide plenty of opportunity to boost bank balances with mid-to-high stakes games available, as well as smaller events.

The leading events at next year’s Aussie Millions are (with approximate value in $/£/€ in brackets):

The full schedule can be viewed at http://www.aussiemillions.com/schedule/