The 2010 WSOP Main Event Final Table has been set already and today will see the final 9 players battle it out for the number one spot, World Series of Poker title as well as the huge first place prize money on offer with Michael… 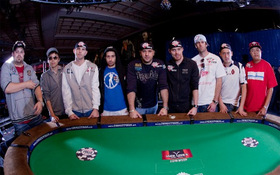 The 2010 WSOP Main Event Final Table has been set already and today will see the final 9 players battle it out for the number one spot to be crowned World Series of Poker Champion as well as the huge first place prize money on offer.

With the table made up of increasingly popular players, picking the winner of the tournament could be harder than ever before with the poker industry backing Michael ‘The Grinder’ Mizrachi to win the tournament and the World Champion title.

Although the poker community are naming Mizrachi as the man to beat in the tournament, he isn’t entering the game with the biggest stack, that accolade falling to Canadian Jonathan Duhamel.

With the betting odds for the World Series of Poker tournament now in circulation, many have rushed to place small amounts of money on Bluefire Poker instructor Jason Senti as he enters the match up as short stack with almost 9 times less chips than chip leader Jonathan Duhamel.

With the action soon to take place, we thought that we should have a closer look at the players involved in the final table:

Entering the action as the chip leader, Duhamel has a great starting position and has been made the bookies favourite to complete the tournament and win the bracelet and World Champion title that is attached to who ever wins the match up.

Born in Canada, Duhamel is a professional player that has a huge career ahead of him as he is only 23 years old and during his time at the poker tables, he has seen a fair amount of success.

Evolving his 4.6million chips into the 65.97million chips that he will be entering the action with at the expense of a number of players who shared the same dream of the chance to win the huge prize money available to the winner of the tournament.

John Dolan is a 24 year old poker player from Bonita Springs, Florida and he has become a regular name within the World Series of Poker tournament schedule, cashing six times so far in his career.

Dolan will enter the action with the second highest chip count at 46.2million chips and will be looking to use his advanced poker strategy to capture a vast amount of chips from his opponents when they are seated to do battle.

Learning how to play poker during his time at college, Dolan has evolved into a strong contender for the WSOP title this month, offering him a chance to add a major title to his collection accumulated over the 5 years that he has been playing poker.

Previous to this tournament, Dolan hasn’t really seen too much high return on his play, his biggest cash to date being $33,000 but he has already exceeded that amount with his showing so far in this tournament and he will be looking to claw his way through the positions in order to set a new personal best.

Unlike a number of poker players who play in tournaments like this one, Dolan has remained consistent throughout the tournament, his name featuring within the frontrunners of the tournament for much of the time that it has taken so far.

Originally born in Seoul, South Korea Cheong and his family moved to the United States at the age of 6 and he has set about working on his academic life by completing two degrees at the University of California.

During his time at college, Cheong became familiar with the game of poker through the online poker rooms that are available under the well known screen alias of ‘Subiime’.

Before entering this tournament Cheong was just like Dolan, he had only seen small levels of live poker tournament successes worth $17,000 during a World Series of Poker Circuit Ring Event, but in the time between the final table being set and the action in the next few days, he has experienced better luck at the tables, winning 2 other large tournaments for a total of just short of $400,000, meaning that he is currently running very well.

Cheong will enter the action with 23.5million chips, placing him in 4th place at the moment.

The bookies have ruled him out as being a favourite to win the tournament but with him running as hot as he is at the moment, it could be well worth a punt on this youngster.

Racener is a well respected player who has so far cashed more than $2.5million in poker winnings during his career and although he will be entering the action with 19million chips, it seems that the bookies have been split over the odds on what to offer on this player.

Residing in Port Richey, Florida the 24 year old poker pro will be looking to build on his career earnings with a victory in this event and looking at the standard of play that he seems to bring to the table in every event that he enters, you can’t write him off.

Racener started playing poker at the age of 16 and during his first year he was able to increase his $50 stake into over $30,000, a return that no one can begrudge the player at all.

He has been within the live poker tournament scene for a number of years and has seen success within a number of his events, including cashes in 2006 after taking third place in the World Series of Poker Circuit Championship Event worth $103,527.

Although the odds on offer for Racener don’t really reflect his true playing ability, he is seen as an outside favourite.

Jarvis is considered to be more recognised as an online poker player but with his recent successes over the past year in the live poker events that he has entered, you have to think that his name could become more and more known within the live poker scene.

After eliminating Brandon Steven to secure the final place at the final table, he has continued to show his poker ability at the felts, winning the $1,000 rebuy event at Festa Al Lago this year, cashing almost $72,000 for his first place finish.

Candio has already made history following his inclusion into the running of the World Series of Poker Main Event Final Table, becoming the first Italian to reach that stage of the tournament.

Aged at 26 years old, he didn’t start playing poker until a few years ago but although his time playing the game has been quite short, he has seen a fair amount of success in the events that he has entered, most notable being his victory at last years Camianto Italiano $2,648 No Limit Hold’em Main Event, cashing $185,271 for his winning performance.

The bookies are not really backing Candio to take down this tournament after a hand in which proved to be vital to his participation saw Candio take on Joseph Cheong’s pocket aces with little more than 7:spades 5:spades and being forced to call all of his stack with little more than 13% winning percentage, catching a runner-runner draw to complete his straight.

The questionable play seemed to have seen the end of Candio but after winning that hand, he was awarded 26million chips, much to the upset of Cheong.

Seen as the most recognisable player of the final 9, the bookies are tipping Mizrachi’s experience to pay off against a number of less experienced players and will help to increase his 14.4million chip stack into something more suited to the successes that the player has had in his career, cashing more than $8.6million over his career.

This year has seen Mizrachi already win a major tournament within the World Series of Poker, winning his first bracelet of his career in the Player’s Championship $50,000 Event which boosted his bankroll by a cool $1.5million.

Entering into the final table as the oldest member of the final 9 will not affect Nguyen who maintains that his passion in life has always been poker, even though his main career is as a manager of a medical supplies company.

Nguyen is known for his highly aggressive play and large betting strategy, meaning that he will look to force the action into high value pots and with some of the play that we have seen from this amateur, his opponents will have to tread carefully if they are to call his play.

Making up the final nine players at this years main event final table is American Jason Senti, entering into the action as the short stack with only 7.6million chips but that will not mean that Senti will simply look to cash out of the tournament in 9th place, previous showings mean that you can’t rule him out of the match just yet.

Originally beginning his poker career as a poker tournament player, Senti began to move into cash ring tables back in 2006 and has seen a fair amount of success from doing so.

Senti’s poker playing ability is not something that you can take lightly, the pro is an instructor at Bluefire Poker which is one of the best poker training sites on the market.

We hope you enjoyed the article and would like to wish all nine players the best of luck at the final table. Only one player can win of course, but all of them have done exceptionally well to reach the final nine – Good Luck!