After twelve hours of action on Sunday night, 117 players will carry forward chip stacks from Day 1A of the Venom into next Monday´s Day 2.

After twelve hours of action on Sunday night, 117 players will carry forward chip stacks from Day 1A of the Venom into next Monday´s Day 2.

Yesterday´s opening flight of the Winning Poker Network´s Venom tournament was a massive success. 785 players qualified for the event or paid the $2,650 buy-in – taking the Network well past a third of the way to meeting the ambitious $5 million guarantee. With a second opening flight scheduled for Tuesday, and a further opportunity for players to qualify for Day 2 next Sunday, the event might turn a profit.

At the end of a very long session – which lasted twelve hours PLUS breaks – Day 1A chip leader is Thomas Cannuli. Despite being a very successful pro player who cashed five times in the 2019 World Series of Poker, Cannuli qualified for the Venom for free via the Network´s Steps promotion. It will be a tremendous story if he manages to maintain his lead until the end of the tournament.

Cannuli´s stack of 9,641,417 chips is nearly five times the average stack (just over 2 million chips); and players with less than the average might want to consider qualifying again for the tournament as, when Day 2 gets underway, blinds will be 12,000/24,000 (ante 3,600). Fortunately, the Network is allowing players to enter multiple opening flights and carry their biggest stacks forward into Day 2. 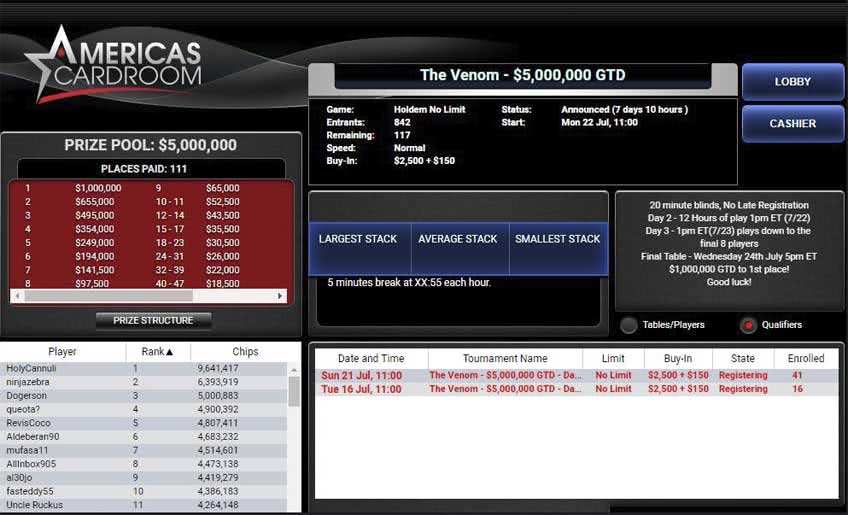 Qualifying Options to Enter or Re-Enter the Venom

The Winning Poker Network is supporting the Venom with plenty of options for players to qualify for the Venom for a fraction of the buy-in. These options include:

The promotions and satellites are flexible inasmuch as players can start their journey to the Venom at freeroll level, qualify through a couple of Steps, and use the ticket for the next Step to enter a satellite or an On Demand tournament with the equivalent buy-in. There is also the Spin to Get IN promotion running in the Venom tournament lobby in which you can win a seat in the Venom from just $0.01.

An Extra Incentive to Visit a Winning Poker Network Site

Earlier this month, we brought readers the news that the Winning Poker is hosting a summer OSS Cubed series starting next Sunday July 21st. We didn´t know at the time what promotions were going to support the series, but now the Network has released details of a reload bonus so players can top up their accounts ahead of the series.

The reload bonus consists of a 50% bonus on deposits up to $1,000 (maximum bonus = $500), which is cleared at the rate of $5.00 per 120 Award Points earned contributing to the rake or paying tournament entry fees. In order to take advantage of this opportunity, visit the cashier page at either Americas Cardroom (ACR) or Black Chip Poker (BCP) and make a deposit using the WPN bonus code “VENOM”.

If you are not yet playing at either of these sites and you would like to take part in the Venom or OSS Cubed series, both offer first deposit bonuses of either 100% up to $1,000 if you make your first deposit with a credit card, or 200% up to $1,000 if you fund your account with cryptocurrency. Details of these promotions plus the other benefits of playing at these poker sites can be found in our ACR review and BCP review.