Not to be outdone by the GuangDong Asia Millions Main Event, the second annual One Drop breaks the record for the largest high roller event ever. 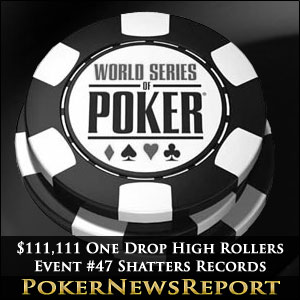 Not to be outdone by the GuangDong Asia Millions Main Event, the second annual One Drop breaks the record for the largest high roller event ever.

As the Event #47 money bubble approaches, tensions among the remaining 27 players are mounting high – and rightfully so. See, the One Drop High Rollers is no ordinary event. Whereas most high rollers draw less than 100 participants, the One Drop drew a staggering 166 players. Only the Main Event is expected to boast a larger prize pool, and no other event at this year’s WSOP features a higher price of admission.

The only high roller in recent memory to come close to One Drop’s prize pool was the GuangDong Asia Millions Main Event. However, even though the buy-in for that event was higher ($130k), it only featured 71 unique players and 54 rebuys. The prize pool generated by One Drop is over $2 million larger.

In total, $18.44 million dollars was collected, $553k of which was donated directly to the One Drop Foundation. That still left almost $17.9 million in the middle, making for the largest prize pool in a high roller event ever.

Although last year’s Big One for One Drop featured a bigger overall prize pool, it was not considered a high rollers event. And because a lot of big name pros weren’t overly willing to plunk down a million bucks on one tournament, the majority of last year’s field was comprised of wealthy businessmen, rich amateurs and entrepreneurs. So while the level of competition wasn’t exactly soft, it wasn’t as fierce as one would expect in a one-million dollar tournament.

However, this year’s One Drop features the single toughest field in poker history. Included among the participants are Phil Ivey, Phil Galfond, Daniel Negreanu, and Phil Laak, young prodigies Andrew Lichtenberger, Andrew Robl and Dan Kelly and of course returning champion Antonio Esfandiari. The only notable pro that is decidedly missing was last year’s 4th place finisher Phil Hellmuth. Claiming that he just wasn’t “feeling it,” Hellmuth decided to enroll in a $2,500 Omaha event instead. Maybe he figured that winning his 14th bracelet would be easier if all the best competition were busy playing another event.

Also absent from the field was the founder of the One Drop Foundation, Guy Laliberté. Apparently busy with other obligations, Laliberté is expected to make an appearance once the field grinds down to the final table.