102 players – from an entry of 1,496 players – survived a crazy third day of action to carry chip stacks forward into Day 4 of the EPT Barcelona Main Event. 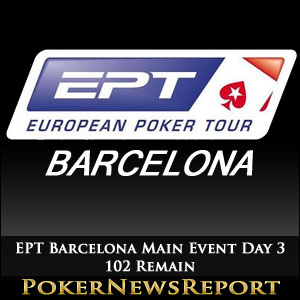 102 players – from an entry of 1,496 players – survived a crazy third day of action to carry chip stacks forward into Day 4 of the EPT Barcelona Main Event.

Five 90-minute levels of action were completed on Day 3 of the PokerStars-sponsored EPT Barcelona Main Event yesterday, with the opening field of 310 players reduced to just 102 players who will compete for a seat in the penultimate day of the tournament when play resumes later today at the Casino Barcelona.

The Bubble Bursts in Incredible Style

Of the 310 players who returned to the Casino Barcelona, only 239 were scheduled to finish in the money – but there was a special prize for the bubble boy laid on by the Seminole Hard Rock Casino in Florida; which comprised of a custom-made guitar and a seat in the $10 million guaranteed Seminole Hard Rock Poker Open which starts on Thursday. This created all sorts of confusion when six all-in hands occurred during hand-for-hand play during Level 16:

In the two other all-in hands, both the players at risk doubled-up – meaning that there were five players tying for the dubious “honour” of being the bubble boy. In normal circumstances, the placings would be determined by calculating who had the largest chip stacks at the start of the hand; but with the guitar and tournament ticket worth $5,300 up for grabs, the issue became complicated.

PokerStars were keen to send a representative to the Seminole event, so the decision was made to split the prize money for places 236-239 between the five players (each getting €6,440 rather than four getting €8,050) and play a five-handed Sit n Go to determine who would win the guitar and tournament seat.

With typical PokerStars efficiency, a table, a dealer and 25,000 chips were quickly organised, and – after one of the longest bubbles in tournament history – Francois-Charles Scapula overturned a heads-up deficit against Randall Flowers to win the unusual side event, the guitar and entry into the Seminole Hard Rock Poker Open.

Looking Ahead to Day 4 of the EPT Barcelona Main Event

The schedule for Day 4 of the EPT Barcelona Main Event is to play down to the final 24 players, and it was at this stage last year that Tom Middleton took control of the Main Event, before eventually going onto win the tournament for €942,000. When play resumes at the Casino Barcelona, the 102 surviving players will be entering Level 20 (blinds 5,000/10,000 – ante 1,000), with the next few players eliminated picking up €12,050.

Those whose sights will be focused on surviving another day and making a statement of intent about winning the €1,261,000 first prize include: