888Poker is hosting a $100,000 freeroll tournament on Wednesday May 3rd, with satellite qualifiers for the event already running around the clock. 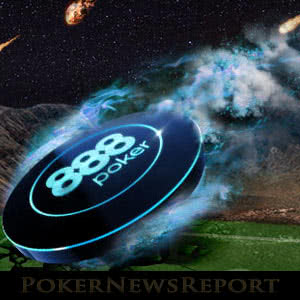 888Poker is hosting a $100,000 freeroll tournament on Wednesday May 3rd, with satellite qualifiers for the event already running around the clock.

The top 250 players in each Meteorite satellite win a ticket for next Wednesday´s freeroll tournament, and every player is being given two free opportunities to qualify – plus further Meteorite satellite entry tickets for completing BLAST and cash game missions.

However, there is a catch. The Meteor freeroll tournament kicks off at 8:00pm GMT and is limited to 20,000 players. Registration opens only four hours before the start of the event and the number of qualifiers is likely to exceed the maximum cap. If you are not around to register for the Meteor freeroll soon after 4:00pm GMT next Wednesday, you might be excluded from the event.

Check Your Eligibility for the Promotion

The Meteor freeroll promotion is open to existing players at 888Poker who have made a real money deposit and placed bets totalling $1.00 or more in the past three months. If you fall within this category, you should have received an email from 888Poker explaining the promotion and your first two entry tickets into the Meteorite satellite qualifiers.

Once you have played in one Meteorite satellite, you can earn extra satellite entry tickets by completing the following missions:

Each mission can be completed up to four times each day, giving you eight extra opportunities each day to qualify for the Meteor freeroll. However, please be aware that the Meteor freeroll is a single-entry tournament, so any extra seats you win in the event will be of no value to you. There is no option to exchange tickets for cash or entry into another 888Poker tournament.

New Players Can Fast-Track into the Meteor Freeroll

If you are not an existing player at 888Poker, and you fancy your chances of sharing in the $100,000 freeroll prize pool, you can fast-track into the Meteor freeroll by following the links from our [geolink href=”https://www.pokernewsreport.com/888-poker”]888Poker review[/geolink] and making a deposit of $10.00 or more using the 888Poker bonus code “100METEOR”. New players will automatically receive a ticket for the Meteor freeroll event without having to qualify, but will still have to register manually next Wednesday. Existing players who do not fulfil the eligibility criteria above can also use this bonus code to receive two free Meteorite qualifier tickets.

When making your first deposit, you might want to think carefully about how much to invest. As well as receiving a free Meteor freeroll ticket, 888Poker will match your first deposit up to $600 (if you create an account following our links – otherwise the maximum match bonus is $400). You will also receive a no deposit bonus of up to $88 depending on your jurisdiction, entry tickets for a further eight freeroll tournaments and a chance to win a seat in 888Poker´s Sunday Challenge tournament. More details about the Welcome Package for new players can be found in our review.