The news that the possible staging of a $100 million poker event in Macau appears to be inaccurate might well come as no surprise to many, with a high-profile Asian poker insider suggesting that the likelihood of such an event getting off the ground is “utter garbage”. 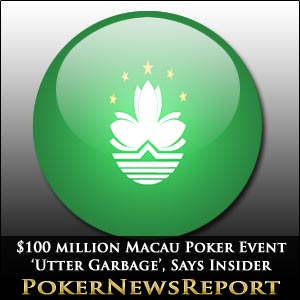 The news that the possible staging of a $100 million poker event in Macau appears to be inaccurate might well come as no surprise to many, with a high-profile Asian poker insider suggesting that the likelihood of such an event getting off the ground is “utter garbage”.

An American businessman, William Murray, told GamingToday about the supposed plans earlier this week, suggesting that a group of five Chinese firms had come together to produce the Macau Pro Am Open that would take place early in 2013.

Murray stated that these Chinese businesses would look to create a prize pool of somewhere between $65 million and $100 million for the event, producing a main event top prize of approximately $25 million.

This would have put the $8.72 million Germany’s Pius Heinz collected for securing the World Series of Poker (WSOP) main event in the shade.

However, it now seems unlikely that what Murray said is true – and that should come as no great shock as the poker event would require that 500 people sign up at $200,000 a pop to create the massive event.

Note that the majority of super high-roller tournaments at the Aussie Millions and PokerStars Caribbean Adventure (PCA) struggle to get past 30 entries, with this year’s $100,000 Super High Roller tournament during the PCA attracted just 38 competitors, with Ukrainian Eugene Katchalov leaving with $1.5 million for victory.

Hall wrote: “This to me seems to be utter garbage. Nobody sensible I know in Macau knows anything about it. None of the casinos, poker room managers, big game players, junket room operators or media guys has heard anything credible.

“You also have to get any poker event approved by the DICJ (Macau regulator) in conjunction with the hosting casino.

“Also, as gambling on TV is highly restricted in China and promotion of gaming generally frowned upon, why would Chinese institutions support it? Publicity grab.”

Oh well, that appears to be that. It’s a shame. Could you imagine what such an event would do for the popularity of poker?

Either way, it now looks like the International Stadiums Poker Tour (ISPT) will remain as the biggest event in poker history with the first edition of the five-day tournament arriving in September next year at London’s Wembley Stadium with a guaranteed prize pool of $30 million. Not too shabby, huh.

Organisers are hoping for 30,000 entries – with registration beginning in January – so expect more news on the ISPT very soon.